The Analytical Angle: How data can help Pakistan fix its trade imbalance

The Analytical Angle: How data can help Pakistan fix its trade imbalance

Rigorous research needs to inform policy and public discourse if Pakistan is to capitalize on its geographic advantage. 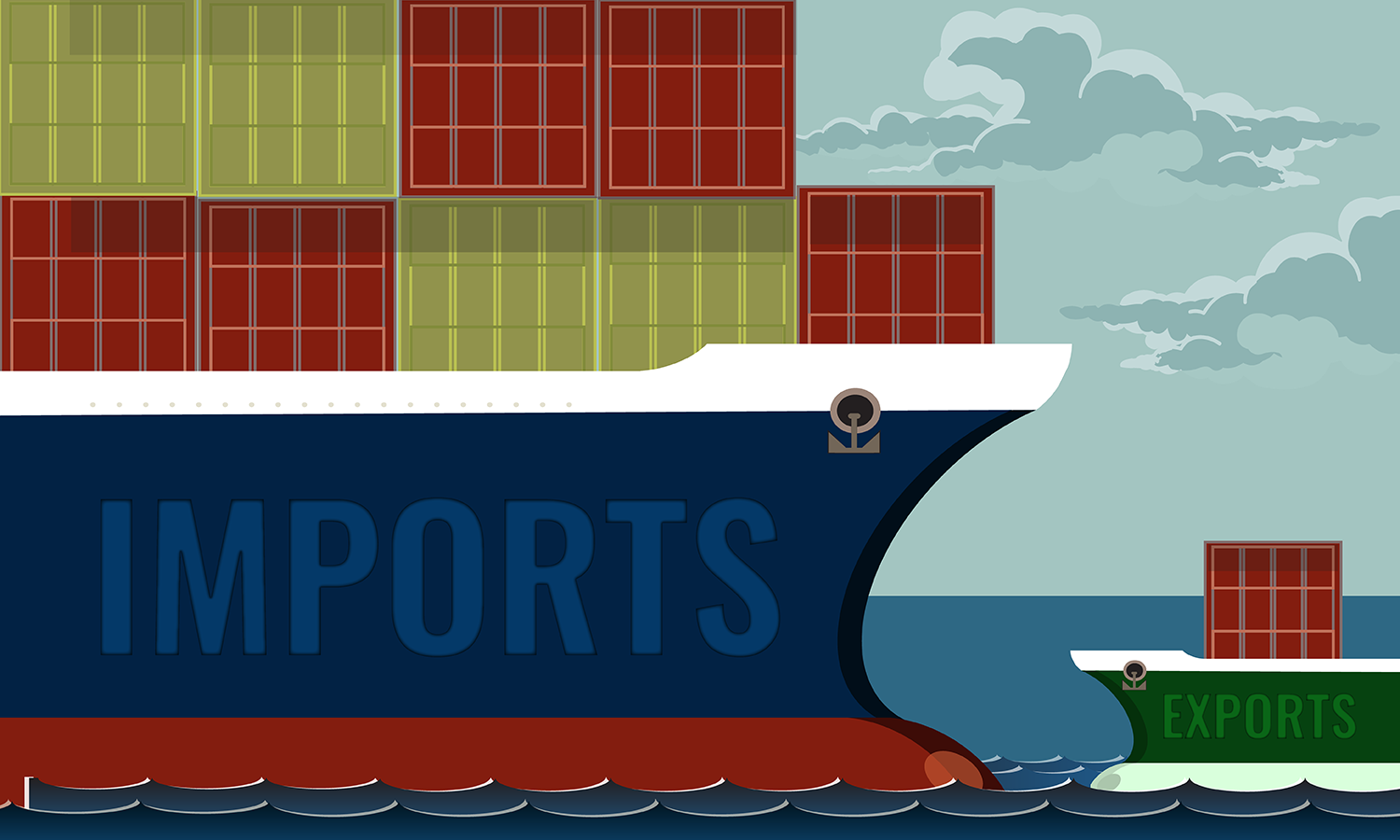 Pakistan has locked in a bailout package from the International Monetary Fund (IMF) and will receive $6 billion as part of the deal. This is the 22nd IMF bailout Pakistan has received.

However, the current account deficit driven by the trade deficit is still high. To extricate Pakistan from this cyclical dependency, the country must increase exports. In business terms, Pakistan needs to start clearing a profit.

Pakistan’s total trade volume amounts to $84 billion (as of February 2018) — that is the total sum of imports and exports crossing the country’s borders. Only roughly $23 billion of that is exports.

Pakistan is deep in the red and on a trajectory of increasing deficits.

Pakistan’s neighbouring countries in South Asia are doing better business. If we add up the total value of the exports of all countries in the world, Pakistan’s share has declined over time, from 0.16 per cent in 2003 to 0.12pc in 2017, according to the Pakistan Business Council. Meanwhile, Bangladesh’s share has increased from 0.09pc in 2003 to 0.24pc in 2016.

Pakistan's exports increased by only 50pc from 2005 to 2017, according to the World Bank’s Pakistan at 100 report. Meanwhile, India's exports of goods and services increased by 216pc, Bangladesh's by 250pc, and Vietnam's by 519pc.

A preliminary analysis of Pakistan’s low level of export is depressingly simple. While many countries would have dozens of categories of exports, Pakistan only has a few — all of which fit into the graph below.

Exports in the textile and food categories have declined, rice has marginally increased and exports of knitwear, bedwear and readymade garments has increased.

In fact, Pakistan’s Economic Complexity Index ranking has gone from 54 in 1980 to 94 out of 126 in 2017. This indicator measures how diverse the export base is as well as how common the goods the country exports are.

The larger message is that the categories are not changing. Pakistan is exporting the same things in 2018 as it was in 2014.

If we again compare the country to a business, we would be like a general store that was selling five products in 2014 and four years later had not broadened its offerings. If Pakistan does not diversify its exports, it is placing too much risk on a small number of commodities and losing out on opportunities to serve new markets.

This traditional analysis of trade data can reveal stagnation in trade that underlies the trade imbalance. However, it lacks nuance. It cannot tell us much about the cause-and-effect relationships that can suggest better trade policy.

Specifically, traditional analysis treats all firms within the sector the same, regardless of their performance. Productivity in the leather industry, for example, effectively stagnated between 2017 and 2018, however the combined — or aggregated — data averages out the fact that some leather firms did better and some worse.

In order to understand this firm-level heterogeneity — or in lay terms, why some businesses do better than others — we need firm-level data.

This data will help identify the high-performing sectors and industries and hence would eventually allow policymakers to identify the underlying constraints that inhibit widespread growth. This would, in turn, allow the provision of right incentives to divert resources away from inefficient firms towards efficient ones.

Is it possible to collect such data?

It is. In the United States, the Longitudinal Firm Trade Transactions Database tracks firm-level data in a central repository and captures details on which firm sent what product (SKU, colour, size, etc.) to which firm in which country.

This data exists in Pakistan in disparate forms. Effective analysis would require collecting or merging it and making it available for analysis.

This should already be happening. Pakistan is a member of the Open Government Partnership, a consortium of more than 70 countries committed to substantive improvements in fiscal transparency, information access, asset disclosure and citizen engagement.

Yet, Pakistan has missed three deadlines to formulate and present a National Action Plan. The current government came in on a mandate to increase transparency so it is imperative that it make data public for analysis and consumption.

Furthering the argument on increasing domestic efficiency, evidence suggests that innovation is spurring average productivity globally and firms in Pakistan can achieve much more with the same resources by innovating in the right dimensions, industries and sectors.

The Sialkot soccer ball cluster is made up of a large number of manufacturers who export approximately60 million hand-stitched soccer balls each year, accounting for about 70pc of global production.

Over several years, the amount of soccer balls produced in Sialkot declined. However, a randomised controlled trial housed at the Centre for Economic Research in Pakistan showed that new technology reduced material costs by 6.9pc and a new incentive scheme increased probability of technology adoption by 32pc.

This study required researchers gathering the data themselves, but on a larger scale, firm-level analysis can uncover the underlying features and drivers which would accelerate exports and boost domestic productivity.

Even if some firm-level data is captured in Pakistan, it is typically not released publicly for independent rigorous analysis by researchers and think tanks. The Census of Manufacturing Industries, for example, includes a wealth of data useful for analysing trade and informing policy. However, the 2017 census has not been approved for release.

The government should open up its firm-level data to researchers and the public.

The opportunities for Pakistan to increase its exports are staggering. This can be clearly seen by examining Pakistan’s trade with its closest neighbours.

Even though India and China are geographically separated from Central Asian countries, they do a much higher volume of trade: China at $21 billion and India at $364 million in 2017, compared to Pakistan’s $81 million.

This is particularly astounding given that some the highest value trade is with your neighbours. Dushanbe — the capital of Tajikistan — is 420 kilometres closer to Islamabad than Islamabad is to Karachi and yet Pakistan’s export to Tajikistan only amounts to $8.6 million (2017).

While Pakistan’s recent visit to Central Asia in a bid to increase regional trade is a welcome gesture, a deep dive into export goods and markets using firm-level details would allow policymakers to make the most of the opportunities this geographic location has to offer.

Customers will not patronise that general store that sells only five products, no matter how close it is to their doorstep. Pakistan needs to diversify exports to serve these new markets, and to do that we must answer this question: How can trade policy optimally allocate resources to diversify, serve new markets and help the existing industries to scale?

Not only can export firm-level data answer this critical question, it can also delineate the optimal spatial distribution of firms within Pakistan to minimise transportation costs.

There are a number of other fundamental trade questions that would further enrich trade analysis for policymakers especially given the improvement in trade infrastructure with the China-Pakistan Economic Corridor (CPEC).

How do CPEC-related infrastructure development projects help reduce trade costs for firms in central and northern areas? How does it help Pakistan’s trade to Central Asia and enable export growth? What analysis led to financing certain projects versus not financing others?

Rigorous research needs to inform policy choices and public discourse if Pakistan is to fully capitalise on the geographic advantage and exploit the CPEC infrastructure investment.

This article originally appeared on Dawn.com as part of The Analytical Angle, a monthly column in which top researchers bring rigorous evidence to policy debates in Pakistan. The series is a collaboration between the Centre for Economic Research in Pakistan, Evidence for Policy Design at Harvard Kennedy School, and Dawn.com. The views expressed are the authors’ alone.