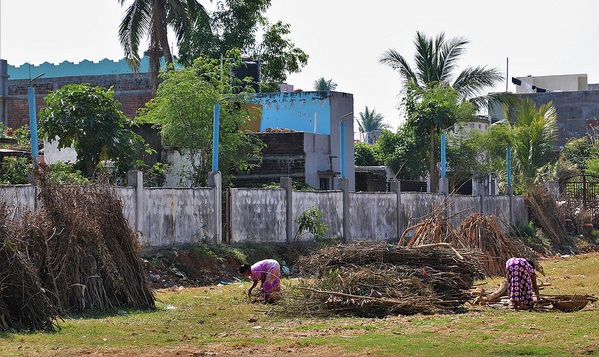 Several studies find that male-operated – but not female-operated – microenterprises benefit from access to grants or loans. But these analyses overlook that female entrepreneurs often reside with a male business owner. Using data from randomized trials in India, Sri Lanka and Ghana, this paper finds that household-level income gains are equivalent regardless of the grant or loan recipient’s gender. Low average returns of female-run enterprises reflects the fact that women’s capital is typically invested into their husband’s enterprise.

In India, 78.8% of the workforce is self-employed. Across developing countries, more than half of the labour force is employed in small, informal firms (International Labour Organization (ILO), 2017). So, if we find the right ways to make microenterprises grow, we could reduce poverty and contribute to the wellbeing of millions.

Several recent empirical studies have tested whether expanding access to capital would help micro-entrepreneurs grow their businesses. These have consistently found that male-operated – but not female-operated – microenterprises benefit from access to grants or loans (see, for instance, de Mel et al. (2008), Fafchamps et al. (2014), and Fiala (2014)). Common explanations are that female-run enterprises have low returns to capital, or that women are less able to make sound or timely enterprise investments. If either of these is true, then microfinance and other credit programmes for the poor should target men rather than women to maximise impact on microenterprise growth.

What these existing studies have overlooked is that female entrepreneurs often reside with husbands and fathers-in-law who may run their own microbusinesses. So when a female micro-entrepreneur gains access to a grant or loan, she may choose to invest in a household business that is not the one she owns.

In a recent paper (Bernhardt et al. 2017), we look at female micro-entrepreneurs’ returns to grants and loans through the lens of household-level – and not individual-level – investment decisions. We re-examine data from previous studies in India, Ghana, and Sri Lanka, which experimentally varies access to grants or loans in order to estimate entrepreneurs’ returns to capital. We find that returns for a female-owned microenterprise are higher when you take into account all household investment opportunities available to her.

(1) Field, Papp, Pande, and Rigol (2013) partnered with Village Financial Services, a microfinance institution that operates in the peri-urban areas of Kolkata, India and lends to low-income women. In the original study, the researchers randomly assign borrowers to receive one of two loan contracts: (i) the standard microcredit product where borrowers received a loan and began repayment two weeks after loan disbursal, or (ii) a grace period contract where repayment began two months after loan disbursal. The authors find that the grace period contract leads to significant business growth, which continues three years after the completion of the study.

(2) De Mel, McKenzie, and Woodruff (2008) select a group of 408 microenterprise owners in Sri Lanka (190 of whom are female) and randomly assign them to be offered either cash or in-kind grants, worth either US$100 or US$200, or to a comparison group that receives nothing. The authors find that while men exhibit marginal returns to capital of 9% per month, women’s returns to capital are 0% per month.

(3) Fafchamps, McKenzie, Quinn, and Woodruff (2014) select a group of 793 microenterprise owners in Ghana (479 of whom were female) and randomly assign them to be offered either cash or in-kind grants worth US$120, or to a comparison group. The authors find that in-kind grants lead to an increase in profits of 30-60% for men but to no effect on profits for women.

Across all three settings, 41% to over 50% of the female entrepreneurs who are the test subjects live with another business owner – usually male.

Women are investing in men’s businesses

Our findings call into question any perception that women are innately less entrepreneurial than men.

First, we find that households benefit from an influx of capital, regardless of whether the intervention is directed towards male or female enterprise owners.

When we take the approach of earlier work and analyse the impact of the capital-shock by looking only at changes in profits of intervention recipients’ enterprises, we arrive at the same results as earlier studies: it appears as though female-owned enterprises do not benefit from more flexible loans (in the India study) or grants (in the Sri Lanka study). But when we instead examine household-level impacts of access to capital, a different conclusion emerges: in the India study, household profits of female borrowers who receive the flexible contract increase by 20-29%, relative to household profits of those in the comparison group. Similarly, in Sri Lanka, we observe a significant rise in household income among the full sample of households in which female entrepreneurs receive a grant1. These results demonstrate that previous estimates of returns to capital of female entrepreneurs are low partly because women frequently use capital to invest in businesses that are not their own.

Second, we find that female grant or loan recipients’ investment decisions are linked to their household’s occupation composition.

In all three studies, when women are in single-enterprise households their enterprises have returns to capital comparable to those of male-owned enterprises. Conversely, when there are multiple entrepreneurs in the household, capital interventions have no effect on female borrowers’ enterprise outcomes.

A woman is as capable of running a business as a man – this is evident in our finding that when a woman’s business is the only one in the household, it responds to capital investment in the same way as a man’s. Our findings shed light on what kind of business support will and won’t work. Programmes that aim to improve women's business skills have shown limited success. Given the dynamics we have uncovered such training is unlikely to have a significant impact on women's level of profits when there are male enterprise owners in the house.

Our results also raise important questions about within-household dynamics and women’s investment choices. In households with several businesses, why do women micro-entrepreneurs hand over their capital to their spouses or other male household members? And what factors influence a household’s decision to open one or multiple enterprises? Households might open several businesses as a means of diversifying their investments, and women’s decisions to invest their loans in other businesses may then be profit-maximising for the household. Alternatively, it may be that women’s own enterprises are high-return, but their capital is directed to other household businesses because they lack control over it. If we identify the prevalent channels, we may begin closing the gender gap in microenterprise returns.

Note:
1. Fafchamps McKenzie, Quinn, and Woodruff (2014) do not collect household income data or profit data for other household enterprises, so we omit their sample from this part of the analysis.

This article first appeared in Ideas for India.