New Possibilities for Cutting Corruption in the Public Sector

New Possibilities for Cutting Corruption in the Public Sector

In their day-to-day dealings with the government, citizens of developing countries frequently encounter absenteeism, demands for bribes, and other forms of low-level corruption. When researchers used unannounced visits to gauge public-sector attendance across six countries, they found that 19% of teachers and 35% of health workers were absent during work hours (Chaudhury et al. 2006). A recent survey found that nearly 70% of Indians reported paying a bribe to access public services.

Corruption can set into motion vicious cycles: the government is impoverished of resources to provide services, and citizens are deprived of the things they need. For the poor, this might mean that they live without quality education, electricity, healthcare, and so forth. In contrast, the rich can simply pay the bribe or obtain the service privately, furthering inequality.

Much of the discourse around corruption focuses on punishing corrupt offenders. But punitive measures can only go so far, especially when corruption is seen as the ‘norm’ and is thus ingrained in institutions.

What if we could find ways of identifying the ‘goodies’ – those who enter the public sector out of a sense of civic responsibility, and serve honestly – and weeding out the ‘baddies’ before they are hired? New research shows this may be possible.

Can we test for civic responsibility?

Any programme that aims to attract goodies and screen out baddies depends on reliable methods that will predict honest behaviours. Do they exist?

You can test personality
For decades, questionnaires have dissected personality into the ‘Big Five’ traits of openness, conscientiousness, extraversion, agreeableness, and neuroticism. These traits have been shown to be predictors of behaviour and outcomes in the workplace (Heckman 2011). As a result, private sector employers often use them in recruiting. Nobel laureate James Heckman and colleagues found that standardised adolescent measures of locus control and self-esteem (components of neuroticism) predict adult earnings to a similar degree as intelligence (Kautz et al. 2014).

Personality tests have also been put to use for the good of the poor: our colleague at Harvard’s Evidence for Policy Design (EPoD), Asim Ijaz Khwaja and collaborators have tested, and then subsequently expanded, personality tests as a basis for identifying reliable borrowers. This way, lenders can offer products to poor entrepreneurs who lack traditional credit histories, but who are nonetheless creditworthy. (See the Entrepreneurial Finance Lab’s website.)

You can test for civic-mindedness and honesty
Out of the personality-test literature grew the Perry Public Sector Motivation questionnaire (Perry 1996), which comprises a series of statements that respondents can state their level of agreement or disagreement with measures of civic-mindedness. The questionnaire has six modules, including “Attraction to Policy Making”, “Commitment to Public Interest”, “Social Justice”, “Civic Duty”, “Compassion”, and “Self-Sacrifice.” Studies have found that scores on the instrument correlate positively with job performance, ethical behaviour, participation in civic organisations, and a host of other good outcomes (for a review, see Perry and Hondeghem 2008).

You can also measure honesty in different ways. For example, Fischbacher and Föllmi-Heusi (2013) formulated a game in which subjectsroll a die and write down the number that they get, receiving higher cash rewards for larger reported numbers. While this does not reveal with certainty if any one subject lied since no one else sees the die, it does reveal how far their reported numbers were from the uniform distribution. Those with high dice high points have a higher probability of having cheated. Implementing this, the authors found that “about 20% of inexperienced subjects lie to the fullest extent possible while 39% of subjects are fully honest.”

These and a range of other tools for psychological profiling have opened up new possibilities for improving governance. Here are a few lessons this new literature has yielded.

1. We can test for what type of person is gravitating toward the public sector and perhaps weed out the baddies.
One of us, Rema Hanna, with co-author Shing-Yi Wang conducted a study in India that showed that people who cheat in lab games gravitate toward public service, and also engage in corruption once there (Hanna and Wang 2018). The study involved university students and government nurses in India. It went like this:

First, 669 college students, across seven different Indian universities, played a version of the Fischbacher and Föllmi-Heusi dice game, as well as filled out a survey questionnaire on their background and preference. Students who had higher probability of cheating were 6.2% more likely to say that they wanted a government job. 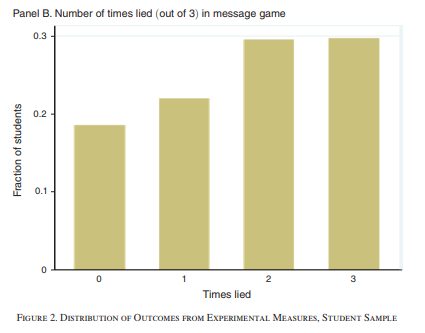 Rema and Shing-Yi then conducted the dice task with 165 government nurses. They were part of one of Rema’s other studies, Dhaliwal and Hanna (2013), which gathered measures of fraudulent absenteeism through the use of random checks over two years. This means that Rema and Shing-Yi were able to see if those who cheat in the game were also more likely to be absent.

The results were stark: nurses with above-median dice points were 10.7 percent more likely to be absent during work hours than those below it.

Taken together, these findings suggest that individuals may select into public service based on honesty levels, and also serves as proof of concept that honesty is measurable and predictive of malfeasance on the job. There is a long way to go before we can screen out baddies with lab games – especially since the dice game may only work until subjects know what it is intended to measure – but given the high cost of corruption, further research is in order.

Not only do psychological tests hold promise in helping select civil servants who are less corruptible, they may also complement policies to decrease corruption among those already on the job.

2. We can measure who will be most responsive to different types of interventions.
A research team worked with a government agency charged with reforming procedures at local clinics in Pakistan (Callen et al. 2018). The system badly needed reform: at baseline, doctors were only present within the clinics 22% of the time.

The team applied the Big Five personality tests and the Perry Public Sector Motivation questionnaire to three tiers of public servants – 389 doctors, 101 inspectors and 33 senior officials – and scored respondents on an index of personality traits deemed valuable in civil servants. Next, they tested how a multi-component monitoring innovation interacted with the civil servants’ personalities. They replaced the paper-based system with smartphones that fed attendance data up the chain of command. To see the effects of the change, they conducted unannounced visits to health facilities and developed a way of measuring collusion between inspectors and clinic doctors.

So, not only do psychological tests hold promise in helping select civil servants who are less corruptible, they may also complement policies to decrease corruption among those already on the job.

3. We may be able to attract the goodies.
Bureaucracies worldwide already screen applicants: they apply tests – often difficult exams for which candidates spend years preparing – to measure cognitive ability. This introduces a possible conflict: governments screen for ability, and may offer higher wages to attract more able candidates.  But, those higher wages may also attract candidates who are motivated, not by the urge not to serve citizens, but to gain in any number of ways.

An experiment in Mexico suggests that there is no such trade-off (in that context, at least), and that higher wages will attract not only more able candidates, but the “right” ones. Dal Bó et al. (2013) worked with a government development programme that took the unusual step of randomising wage levels across 106 locations in a recruitment drive. Higher wages increased the pool of candidates and effectively compensated applicants to fill positions in undesirable areas. Importantly, the higher wages helped attract better candidates both in terms of quality as measured by IQ and their motivation to serve the public as measured by the Perry Public Service Questionnaire.

A more recent study adds nuance to these findings. Ashraf et al. (2018) worked with the government of Zambia on a recruitment drive for health workers. The team varied the way in which the positions were advertised: in half of the districts, announcements emphasised the ability to do good for the community, whilst in the other half, they emphasised career advancement.

The advertisements that appealed to ambition attracted less pro-social applicants than the ones that appealed to altruism. Yet any trade-off between the two motivations only existed at the bottom of the pool of applicants, i.e. those who were not hired. The career-driven applicants who were hired were equally pro-social as those hired from the altruistic pool. But, even more, they were better public servants. Following the hired individuals over time, the researchers found that career-driven applicants performed markedly better in the job, and the communities they served reaped the benefits: in areas with career driven applicants, the number of women giving birth in health centres was 30% higher, and the number of children receiving polio vaccines was 20% higher, among other superior outcomes.

In short, at least this case, being pro-social did not necessarily entail a greater ability to deliver, whereas those who were ambitious about their careers were successful in delivery, perhaps as a means to advance through the system. It is also a reminder that, in screening to avoid potential ‘baddies’, we may inadvertently screen out people who are effective in a host of other dimensions that are necessary for effective public services. As Banerjee et al. (2012) point out, reforms that focus exclusively on reducing corruption over delivery could ultimately reduce the quality of services by ignoring these other important dimensions.

Beyond goodies and baddies

Using personality tests and other psychological profiling to improve the composition of the public sector is a new field, and the scant evidence on how they function is often conflicted. For example, a study with low-level community health workers in Uganda found that higher pay attracted less socially motivated applicants, in contrast to the evidence from Mexico we have described (Deserrano 2015). Our intent is not to give advice on how to use the tools, only to call attention to their existence and argue that more research is needed to build up a stronger body of evidence.

And more broadly, while thinking of applicants as ‘goodies’ and ‘baddies’ may be useful as a kind of shorthand, it is worth remembering that the picture is, of course, much more complex. A foundational study in the literature on personality testing is the Perry Preschool Project of the 1960s, which randomised a small group of disadvantaged children with low IQ scores into participation in preschool programmes in the US. While the intensive intervention did not raise IQ scores in a lasting way, it did give influence to recipients’ outcomes on personality tests in a way that correlated with higher lifetime socioeconomic achievement, leading Heckman and co-authors to conclude that “Character is a skill, not a trait” (Kautz et al. 2014).

To view corruptibility as a quality one receives at birth is as reductive as viewing a country being ‘naturally’ or ‘endemically’ corrupt. A more productive view may be that corruption is a product of a system that allows it. Finding ways of changing institutions by encouraging and rewarding civic responsibility may allow us to more effectively provide government services that can help reduce poverty.

Ashraf, N, O Bandiera and S Lee (2018), “Losing prosociality in the quest for talent? Sorting, selection, and productivity in the delivery of public services”, London School of Economics and Political Science Working Paper No. 88175.

Dhaliwal, I and R Hanna (2014), “Deal with the devil: The successes and limitations of bureaucratic reform in India”, NBER Working Paper 20482.

This article first appeared on VoxDev.