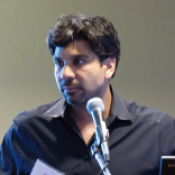 Jishnu Das, is a professor at the McCourt School of Public Policy and the Walsh School of Foreign Service at Georgetown University. His research focuses on new innovations to measure and improve the quality of healthcare and education outcomes around the world. With research across 8 countries and more than 80 publications in leading economics and health journals, his measurement and improvement methods have received wide attention among policy makers and the media and are being scale-up in multiple African and Asian countries. He was part of the team that developed India's federal health insurance scheme, which reached 150 million people in 2016 and in 2012, Jishnu helped write the World Development Report on Gender and Development. He has been the recipient of numerous awards including the George Bereday Award from the Comparative and International Education Society, the Stockholm Challenge Award for the best ICT project in the public administration category in 2006, and the Research Academy award from the World Bank in 2013 and 2017. He is currently a member of several advisory groups, including West Bengal’s Global Advisory Board and the Lancet Commission on Covid-19 in India.