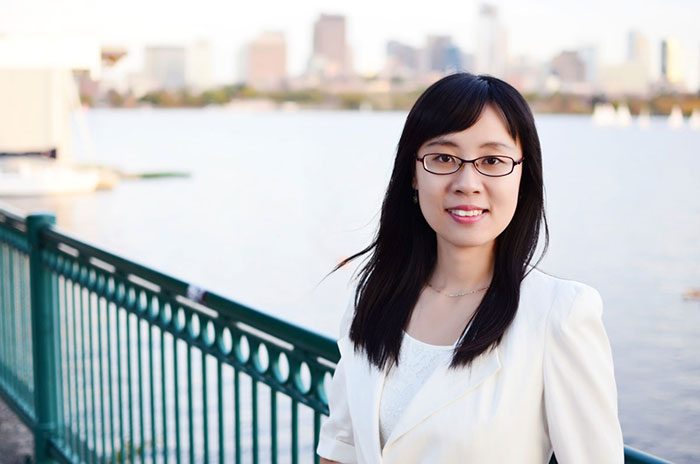 Jie Bai joined HKS as an Assistant Professor of Public Policy in 2017, and is an affiliate of EPoD and the Ash Center. She spoke with the Ash Center's Communiqué magazine about China's efforts to improve production and fight corruption.

Communiqué: Your research focuses on microeconomic issues of firms in developing countries and emerging markets such as China and Vietnam. Broadly speaking, what are some of the economic challenges that firms in these and similarly positioned countries face today?

Jie: One of the key challenges firms in China and other developing countries face today is the difficulty of moving up the value chain to produce higher quality and higher value-added products. Traditional cost advantages are diminishing as a result of rising wages and energy costs. Firms will find themselves competing more and more alongside established global players as the economy shifts out of low-end manufacturing industries. Shedding obsolete technologies and catching up with the world’s frontier is the first step, and eventually innovation and quality upgrading would be the keys to success. For that, we need a financial system that can effectively channel resources to capable prospective entrepreneurs, and well-enforced intellectual property laws to encourage innovation. However, capital market frictions, weak legal systems, and poor law enforcement in many parts of the developing world could pose serious challenges to firm growth and upgradation in the next phase of development.

C: For American consumers, the “Made in China” label is not typically associated with high quality manufacturing practices. What are firms in China doing to counter this perception, and how has the quality of Chinese manufacturing changed in recent years?

J: I think the perception has been gradually changing over time, partly because of some globally successful Chinese companies, such as Alibaba, Huawei, and Midea. As some of these industrial leaders adopt new technologies and practices to improve quality, the world will start perceiving “Made in China” differently no longer a synonym for the cheap and inferior. However, for the same reason that successful firms can generate a positive change in “collective reputation,” public concerns regarding quality and safety issues with certain Chinese products in recent years, especially food products, can lead to greater general distrust. In such an environment, it can be hard for a single firm to signal its quality, and new firms are also “endowed” with the damaged reputation of its predecessors. Such collective reputational forces generate an important externality, and thus call for more government and third-party interventions to establish higher quality standards and enforce tighter quality control.

C: We hear a great deal about anti-corruption efforts in China under President Xi. How has corruption in China hindered economic growth more broadly, and do you believe that Xi’s anti-corruption campaign is likely to reap meaningful economic benefits?

J: I think the truth is that we don’t know much yet (perhaps other than the big blow on high-end restaurants and luxury goods industries—for example, wines). Some say that the campaign has paralyzed the “political ecosystem” in China, leading to inactions of many local bureaucrats; others say that the campaign would eventually reduce corruption and rent-seeking in the economy, bringing fundamental change toward good governance in China. Nearly five years into the anti-corruption campaign, I think we are now in a position to rigorously evaluate the broad economic impact, both short-run and medium-run. I look forward to seeing more rigorous studies on this topic in the next few years.

J: Unlike international trade barriers—tariffs, quotas, and explicit import/export restrictions—domestic trade barriers are much more insidious and harder to measure as they can take many forms. Physical transportation costs within China have certainly gone down significantly over the past decades due to the big investments in railway and infrastructure projects. However, various protectionist measures imposed by local governments still remain, especially in certain strategic sectors of the economy. For example, in the auto industry, local governments give out various subsidies and benefits to favor local brands, which distort consumers’ purchasing decisions and can result in significant welfare losses. Local protectionism could also potentially explain why the industry remains highly fragmented today with many small inefficient players. In general, internal trade frictions, in the form of institutional or political barriers, distort efficient allocation of resources and can have a sizable impact on economic outcomes.