In a pithy letter to his friend in 1789, Benjamin Franklin wrote, “in this world, nothing is certain except death and taxes.” Indeed, from as early and distant a civilization as Egypt in 3000 BC, taxes have been a tool for governments to generate revenue, and a contract between citizens and the state.

However, as certain as taxes are, there is still much to get right in understanding how tax systems and tax policy can be structured to better raise revenue and provide quality public goods, services, and protection to its people. This is uniquely important in developing countries where state capacity might be limited, and the income tax base is only a fraction of the income distribution.

Economist and professor Anders Jensen’s forthcoming article in the American Economic Review examines how the modern tax system emerges over time as a country experiences economic development. This research involves constructing a micro-database of household surveys covering 100 countries at all levels of income and a long-run time-series in the US (1870-2010) and Mexico (1960-2010). Using evidence from this new micro-database, Jensen establishes a set of stylized facts which explain how intimately connected the expansion of the income tax base is to a country’s development, both across and within countries over the long run.

Developed countries typically have a modern tax system with high capacity for collection and redistribution. The tax exemption threshold for a developed economy is typically at the bottom of the income distribution, like in the US where approximately 90% are required to pay incomes taxes. Meanwhile, in a developing economy, the threshold is closer to the top of the income distribution, like in India where approximately 5% of those that are economically active are liable to pay income taxes. This tax exemption threshold has received little attention in academics to date though, to practitioners, it is as an important policy tool.

Jensen presents evidence showing how, as a country moves towards development, it gradually decreases its tax exemption threshold, which expands its income tax base. He also provides suggestive evidence that this expansion is driven by a shift in the employment structure over development, with increasing employee share as more and more people transition from informal self-employment to more formal employee-employment. This is supported by prior work that show how enforcing taxes for employees is much easier than enforcing taxes for those who are self-employed, due to record keeping and information trails and the existence of third-party agents, which lower the administrative burden and cost.

Below is a diagram outlining the logic of how the modern tax system arises over development: 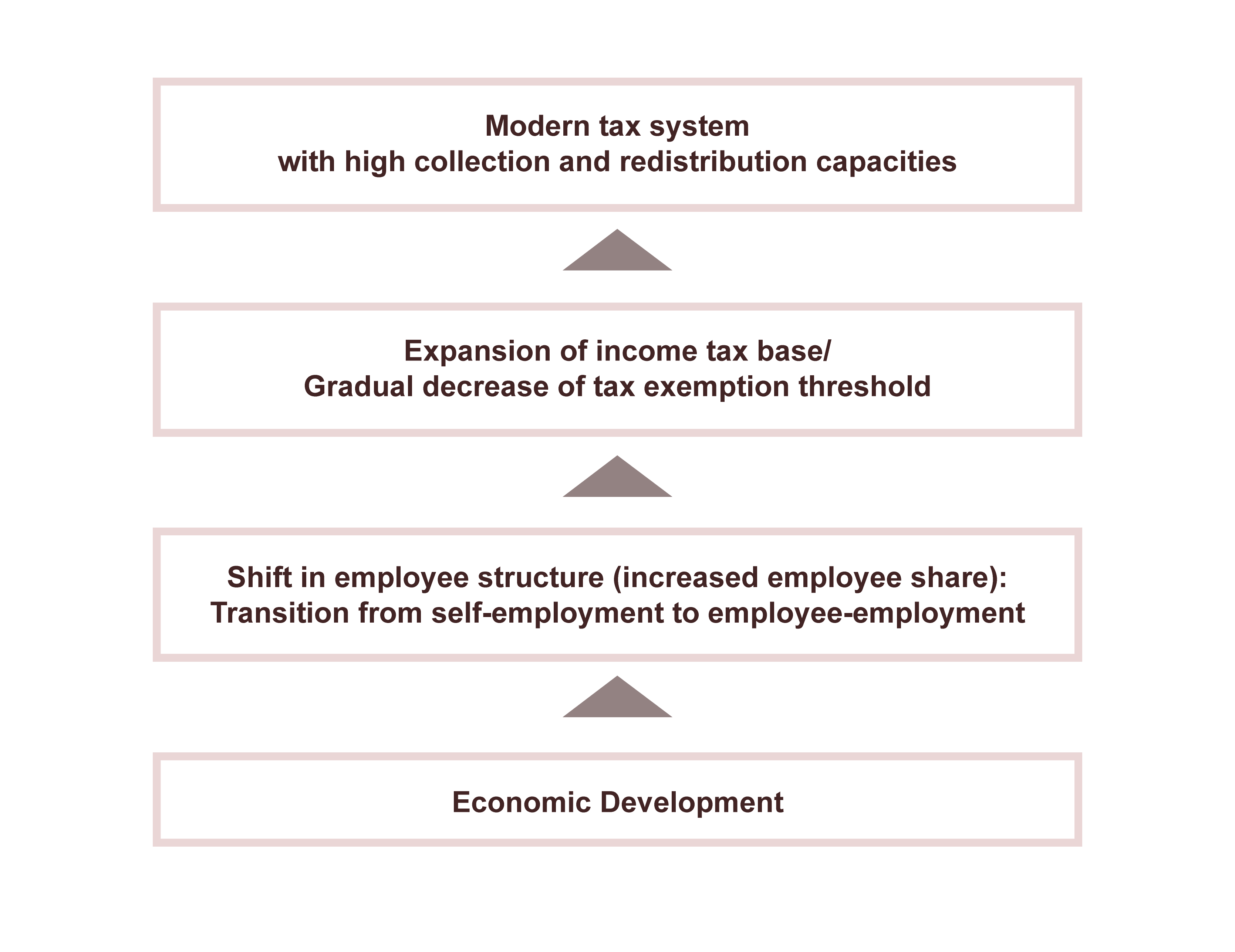 Because of high administrative costs and difficulty in attempting to tax those who are self-employed and do not have records, high employee share is almost necessary for lowering the tax exemption threshold. Jensen goes on the conclude that:

“In this setting where a high employee share on the tax base becomes a necessary condition for effective taxation, the rise of the modern tax system occurs through the gradual increases in employee-share further down the income distribution (fact #1), which lower reform costs and lead to expansions of the tax base (fact #2) that remains constantly high in employee-share (fact #3).”

These findings have implications for public finance and development. As the income tax exemption threshold is a common tax policy tool, it is important to understand that this tool has very different implications in developing versus developed countries because of differing economic structures, and therefore collection and redistribution capacities.