There is no one-size-fits-all solution and we shouldn’t hold out hoping to find it. 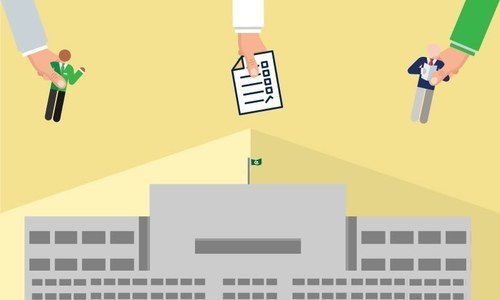 Pakistan Tehreek-i-Insaf’s (PTI) 2018 manifesto calling for the transformation of governance through civil service reform unleashed a flurry of opinions on what exactly Pakistan should be doing to fix the public sector.

Commentators have offered their thoughts on the civil service’s outdated colonial structure, excessive reliance on generalists, lack of tenure options, bloated size, unequal opportunities for career advancement, low salaries and housing perks, corruption, need for e-governance, primacy of the federal service over the provinces and even meta-critiques on the process of reform itself.

While many of these points are valid, the debate as it is currently taking place risks not moving reform forward.

In order for us to truly create change in the civil service, we need to actually test proposed policies using an approach that is analytically sound, designed for the context and rigorously evaluated and refined.

The good news is that this kind of analytical approach is feasible and can work in Pakistan. We know this because our team has spent the past decade collaborating with the government on experiments that test ways to enhance civil servants’ performance.

One of us, Asim Khwaja, is working with coauthors Adnan Khan (London School of Economics) and Benjamin Olken (Massachusetts Institute of Technology), and the Excise and Taxation Department of Punjab on a series of studies. This collaboration has yielded insights both on how to improve the civil service and how to approach reform more broadly.

Civil servants’ performance can be enhanced by either changing who they are or how they behave. However, replacing civil servants is difficult and disruptive, with no guarantee that their replacements would be any better.

Changing how we reward them, with their pay tied to how well they do their job, can be easier and effective. Indeed, two of our studies in Pakistan demonstrate that offering well-designed incentives to civil servants can significantly improve their performance.

Each study utilised a randomised controlled trial design. A “treatment” group was randomly selected to experience a reform and compared to a “control” group, which continued under “business as usual,” to accurately determine the impact of the policy.

In the first study, the research team assigned a treatment group of tax collectors to receive a salary bonus based on their performance.

We found that over two years, tax revenues in circles where tax collectors were assigned to these performance pay schemes had a 46 per cent higher rate of growth in tax collection compared to those under regular pay.

Offering performance pay as an incentive was not only effective in improving tax collection, but it was also cost-effective: the government’s return on investment for instituting performance pay was 30pc. In fact, the returns could be substantially higher since our findings suggest these effects persist over time.

In a second complementary study, the research team examined whether non-monetary incentives can also work — specifically, whether the promise of merit-based postings to desired locations can motivate civil servants to improve their performance.

We found that a treatment group of tax collectors who were allowed to choose their subsequent postings based on how well they performed showed a 41pc higher growth rate in tax collection relative to the control group.

While this growth rate is slightly lower than what we discovered with monetary incentives, the non-monetary scheme had zero additional financial costs (aside from administrative and political costs), suggesting that it offered an even higher financial return on investment to the government. We expound on the results in an essay on the Evidence for Policy Design website.

What does this all mean for the immediate task of civil service reform?

Our findings provide powerful and actionable evidence that incentives matter. Both monetary and non-monetary methods can incentivise performance, and they work even without hiring or firing any civil servants.

A second, broader point is that our research shows that experimentation is the right way to work out the specifics of reform.   In order to attain that positive effect in the first study, we tried three different bonus schemes, all of which had the potential to incentivise performance.

We found that in our context, the simplest bonus scheme worked best, even though it rewarded only a single dimension of performance. This “revenue” scheme, where tax collectors were paid a bonus directly tied to the revenue they collected, had a 62pc higher growth rate in tax collection.

The most comprehensive scheme — the “flexible bonus,” where tax collectors received bonuses based on a range of subjective criteria set by senior staff — was the least effective.

Although the “flexible bonus” scheme was based on a more complete set of information, which we thought might make it a stronger incentive, in our context, the simplest scheme worked best.

Ultimately, in order to find the best policy option, one will need to test a range of schemes for each specific situation.

A third point is that experimenting with different options not only lets you identify benefits, it helps you watch out for side effects that can harm citizens. One concern with the simple “revenue” scheme is that only rewarding on tax collection could lead to over-taxation or harsher treatment of taxpayers.

In order to examine whether this would happen, our study collected information on tax assessment accuracy and taxpayer satisfaction. The good news was that we found no adverse impact. The troubling news was that while some taxpayers indeed pay higher taxes, others instead report offering higher side payments in the new bargain made.

The point here is that collecting detailed information can help you contour the policy for the best possible outcome for all — including coupling rewards with penalties for undesirable behaviour.

Finally, one should track the impact of a policy reform over time to help refine it. Findings from both our studies suggested that incentives need not be offered every year, but instead only at key moments for the department.

Our first study found that the increases in tax collection lasted beyond the period of performance pay (because newly recorded properties continued to generate revenue).

Our second study found that tax collectors who were offered merit-based transfers two years in a row were actually less effective than those who only experienced it once (possibly due to the disruption caused by frequent moves).

By understanding the nuanced effects of the policies over time, we can increase both their impact and their cost-effectiveness.

These findings can specifically help inform civil service reform in Pakistan, but they also speak on a broader level on how to affect policy change. For successful reform to take place, we need to create an environment where multiple — and often contrasting — ideas can be rigorously tested, compared and refined.

While hypothetical debates may offer the opportunity to put forward a range of policy options, we will never find resolution through highly partisan argumentation or the endless airing of expert opinions on talk shows.

There is no one-size-fits-all solution that will resolve all problems facing a nation, and we shouldn’t hold out hoping to find it. Any one study can be highly informative, but for real change, we ultimately need many such studies.

By systematically testing policies and making a case for them based on hard data, we can create a structure to discover the best reforms that stick and thrive.

This article was first published in Dawn.com as part of The Analytical Angle, a monthly column that brings rigorous evidence to policy debates in Pakistan. The series is a collaboration between the Centre for Economic Research in Pakistan (CERP), Evidence for Policy Design (EPoD) at Harvard Kennedy School, and Dawn.com.